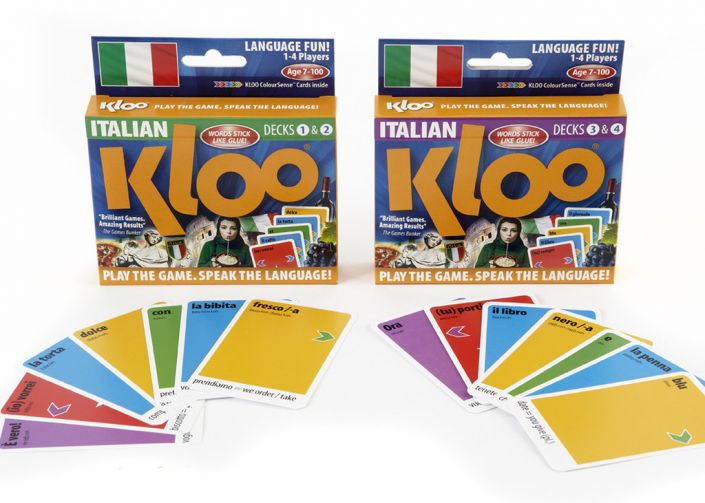 Play the game, speak the language

Multi-award winning KLOO has turned learning a language into a game. Players make sentences and learn words in Italian to score points. The longer the sentence and the more words you learn, the faster you score. In this way, KLOO makes learning a language fast, easy and a lot more fun. But there is no need to be a language expert in order to play - you can start playing KLOO as an absolute beginner - just be ready for how fast you pick up the language! Within a few games, players effortlessly learn hundreds of words and how to make tens of thousands of sentences. This pack contains four decks of KLOO cards (Decks 1, 2, 3 & 4). Each deck contains useful Italian words for making sentences around the themes of "People", "Eating & Drinking", "Places" and "Everyday Objects". As players learn all the words in one deck, they move onto the next, building their vocabulary as they go. Within just a few games, players learn how to make thousands of sentences quickly and easily.

KLOO was designed by games experts, tested by teachers, manufactured in the UK and launched in the autumn of 2010. In 2011 KLOO became an instant classic when it won the "Best Classic Toy" at the Dr Toy Awards in the USA. In the UK KLOO won ToyTalk's "Best Board and Card Game of the Year".

The Learning Principles used in KLOO:

1. The best way to learn is through DISCOVERY LEARNING. That is the natural way we learned our first language. Hardly any products use this. Discovery Learning involves discovering what you want to know, when you want to know it. Some scientists call this the “Aha! Moment” or “Eureka Moment”. It’s when you “get it”. This is how our brains are hot-wired to learn a language.

2. CONTEXT is crucial. By putting words into context you give your new vocabulary meaning. Meaningfulness is a central plank for getting words into your LONG TERM MEMORY. The best technique for learning words is to seek the meaning of a word (because you need to know it) and then use it in a sentence. Using it straight away helps to lock it in.

3. FUN is a hugely important factor but often overlooked. Many people give up learning a language because it becomes a chore. However if you enjoy it, you do it more. The more you do it, the more you learn. KLOO® is definitely FUN.

4. REAL PEOPLE means interacting with real people as opposed to learning from screens or audio devices. We learned our first language by talking with other people and all research shows this is the best way. Speaking with others will massively reduce your learning time. The person you are interacting with does not have to be fluent. A friend, parent or colleague who is willing to interact and learn with you will make a big difference.

5. GENERATIVE means learning how words fit together to make a sentence rather than as unconnected words (as in vocabulary lists). If you learn how to use words in sentences you rapidly build up the number of ways you can express yourself. With just one deck of KLOO® you can make nearly 3 million sentences.

The pack comes complete with: 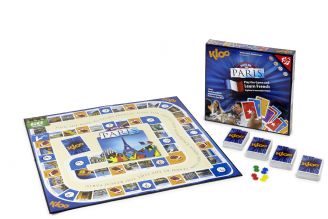 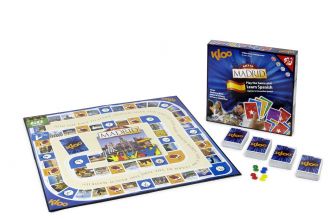 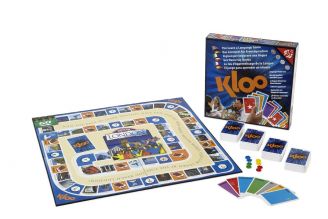