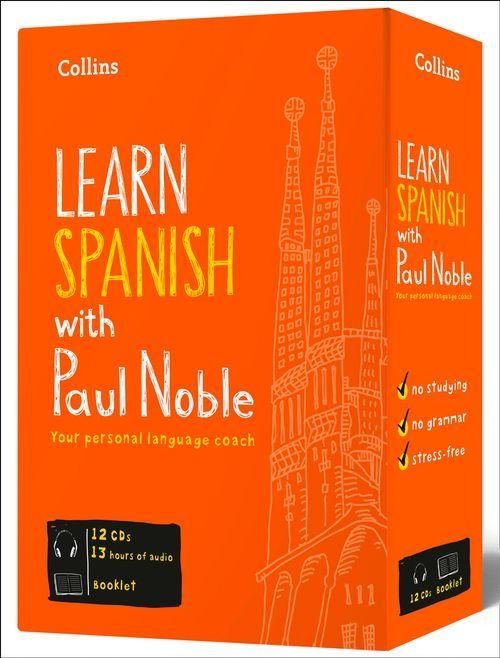 The language guru everyone is talking about – Paul Noble will revolutionise the way you learn language.

No textbooks, no rote memorisation, no chance of failure.

For all those who have struggled to learn Spanish in the past.

For all those who think they’re just not a linguist.

For all those who don’t have the time – or the inclination – to sit and study a textbook.

This is your chance to have a one-to-one lesson from Paul and his native-speaking Spanish experts, and all in your own time. Download the course to your MP3 player and within a few hours you will have learned over 6,000 Spanish words. Importantly, you will also know how to make your new vocabulary work for you. No set phrases, no lists of vocabulary. Just real Spanish at your fingertips.

Paul Noble is a genius with a higher IQ than Einstein. Despite this, he still struggled with language learning at school. He found himself feeling ‘confused, incapable and unable to really say anything’. As a result of his negative early experiences, Paul has come up with a groundbreaking new method of language teaching that removes the need for months of study. With Paul Noble, everyone really can speak a language.

“I'm utterly amazed by it. I can't recommend it highly enough."

“It was so relaxing. It was the first time I've ever tried studying a language where I didn't feel stressed at all. It was just what I needed - and probably what everyone else needs too. It just made the language seem so simple and easy to learn."

"The course was so interesting; it was amazing how the language was pulled apart and then put together again by us ourselves, so that we can actually now leave and speak German."

“I did ‘O’ Level French at school and spent several holidays in France but could never really say much beyond bonjour and merci. Now, I can make up my own sentences and actually communicate what I want to say. The course was so confidence-building that I actually can’t shut up speaking the language. It made it easy to talk and, importantly, to go on learning more afterwards. Fabuleux!”

“Simply amazing. I would recommend Paul Noble to anyone and everyone, whether you are a complete beginner or you have a basic working knowledge already."

“It contrasts dramatically with other experiences I've had of trying to learn foreign languages. I feel I've learnt more in the past two days than I had in the previous two years.”

Learn Spanish with Paul Noble - About the Author

Who is Paul Noble?

Paul struggled with languages at school and left age 13. At 14, he became a member of MENSA with an IQ 18 points higher than Einstein's!

Frustrated by traditional teaching methods and convinced that there was a better way to stimulate language learners, he developed his own language learning method, and has since gone on to found the Paul Noble Language Institute, where he has successfully taught thousands of students how to speak a new language with confidence - and all in under 17 hours.

Write Your Own Review
Only registered users can write reviews. Please Sign in or create an account