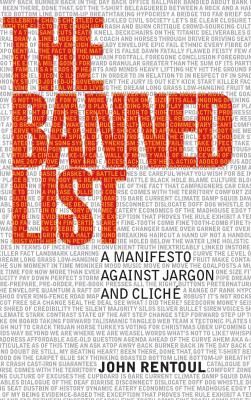 The Banned List: A Manifesto Against Jargon and Cliché

The Banned List: A Manifesto Against Jargon and Cliché by John Rentoul

Bad English, as George Orwell argued so eloquently over 60 years ago, is a sign of laziness, sloppy thought or insincerity. Yet why is it then that so many of us remain in thrall to cliches, stale idioms and empty phrases when it comes to expressing ourselves?

Jargon is undoubtedly alluring: it's quick, it's easy and (we like to think) it makes us look like we know what we're talking about. It helps us fit in with others who use the same language. The trouble is it all too often becomes a short-cut for saying nothing very much; it conceals meaning rather than communicating it.

John Rentoul examines how poor writing and a reliance on jargon have damaged our ability to communicate with each other and makes the case for the use of clear English. Unashamedly polemical in tone, this compelling essay condemns such linguistic atrocities as the verbification of nouns, the use of waffle to pad out a simple statement or the importing of business jargon into everyday situations. The perfect read for anyone who has ever had the misfortune to read a public policy report on key deliverables or a hackneyed newspaper article about the latest game-changer.

"Am loving the Banned List. Will be my stock Xmas pressie. Was reading on bus earlier; woman next to me started tutting because I laughed too much." --Philip Cowley, Professor of Politics at Nottingham University

"Reading the brilliant - or should that be superb? - John Rentoul Banned List manifesto. Must buy." --Benedict Brogan, Deputy Editor, The Daily Telegraph